(Published 2012-12-27)
The International Social Survey Program (ISSP) is a survey study of adult citizens’ attitudes on issues such as social welfare, environment, national identity, work orientations, religion, and family relations. Between 40 and 50 countries are participating in the ISSP, which started in the mid-1980s.

A research team from the Department of Sociology at Umeå University is responsible for the Swedish part of the study. The research group has worked with ISSP since 1992 and they compare the database with a high-quality wine; it becomes better and better over time. Jonas Edlund is Professor of Sociology at Umeå University and head of ISSP in Sweden. He particularly emphasize some of the advantages of the material:

Jonas Edlund analyzes ISSP data in most of his own work. One of his recent studies concerns the cross-national patterns of religious faith. He investigates to what extent the degree of religiosity is associated with how modernized or how socially unequal a society is. Very simply described, the modernization hypothesis states that when a country becomes richer and more industrialized, the degree of religiosity in the population falls. Edlund's analysis shows that this correlation is weak; he finds for example a high proportion of religious citizens in relatively wealthy industrialized countries like the United States, Ireland and Italy. 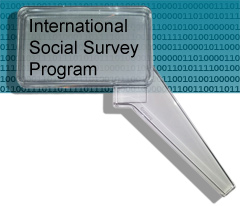 – If we examine the social inequality in a society instead, we find a stronger correlation with religiosity. It is clear that in more unequal countries there is a much higher degree of religiosity among the population, regardless of whether the country is rich or poor, says Jonas Edlund.

He believes that this correlation might be related to religion as the only belief system that offers some sort of consolation; religion seems to give people an explanation to why things are like they are. According to Edlund, religion isn’t regarded as necessary in the same way in a community with a higher degree of security.

On three occasions, the ISSP survey has focused on religion and values: 1991, 1998 and 2008. This means that in this research area it is possible to make comparisons both over time and between countries. In several other research areas there are also measurements over time from at least the early or mid-1990s. Only the studies focusing on sport and leisure (2007) and health (2011) have this far been carried out just once.

Among the nearly 50 countries that participated in the surveys, six continents are represented. All the major Western OECD countries are included, as well as many countries in Eastern Europe. Argentina, China and Palestine are among the latest new additions.

– In the beginning we replicated the different themes every five years. Since we nowadays have more research areas covered in the study, we have begun to replicate the surveys every ten years instead, says Jonas Edlund.

The International Social Survey Program is an annual comparative survey conducted in over 40 countries around the world. ISSP started in 1985 as a cooperative project between four countries: USA, Great Britain, Australia and the former West Germany. Researchers had by this time started to build up comparative databanks on income distributions and indicators of social policy and mobility. However, there was no corresponding comparative data within the field of attitude research, and therefore the ISSP was created.

The Swedish ISSP is a postal survey sent out to a random sample of the Swedish population aged 18-79. Swedish ISSP data from 1994 to 2012 are freely available electronically via the SND website. International ISSP data can be downloaded for free from GESIS’ (Leibniz Institute for the Social Sciences) website.