Religious conceptions and church customs – a goldmine for further research

(Published 2014-04-01)
Youngsters sleigh racing on St. Stephen's Day, saw blades that twang when someone dies, the due amount of bread to give to the poor when they went around the country side after Christmas. These are things that you can read about in SND's material on old church customs and traditions. The collection is a goldmine for researchers interested in aspects of the Christian customs and traditions that used to dominate both workdays and holidays.

Documentation of the dwindling remains of a Swedish ecclesiastic unitary culture is now made available by SND. 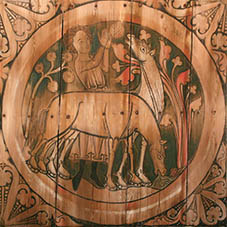 Knowledge of the Swedish people's familiarity with Christian beliefs and church customs give us a good picture of ways of thinking and of living in earlier centuries.

The research behind the freshly published study Questions concerning religious conceptions and church customs was initiated in the 1940s.

The researchers set out with the notion of a formerly common Swedish ecclesiastic unitary culture now being in the process of disappearing. On the basis of this material it would be interesting to try to find out whether such a unitary culture did in fact exist.

The socia-economic changes of the early 19th century were taken to have led to a differentiation of religious conceptions and a loss of customs and traditions as a given.

Now the remainders of a formerly self-evident culture had to be preserved.

During the 1940s a considerable amount of work was put into collecting and documenting tales of this heritage. Persons borns between 1820 and 1935 and living all over Sweden, across the 13 dioceses, were interviewed. When they report on their parents' memories we even gain some insight into customs and traditions of the late 18th century.

5,600 text files with free text answers to the questions are organised into dioceses and parishes. 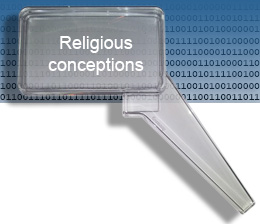 Through this work Swedish ethnology gained a new dimension since before this study the spiritual side of popular life had been largely ignored in research. The ways of thinking of the Swedish people were deeply rooted in Christianity and the questions cover such topics as which types of edifying literature were read, celebration of holidays, worship, songs, psalms and musical instruments, eulogies, home visitations and catechetical hearings, clothing customs, sunday rules and the fast, movements for religious revival and confirmation. 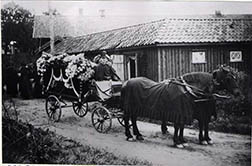 One Aron Andersson from a family of farmers in the parish of Södra Härene, diocese of Skara, for example tells us how in the 1870s the Christmas porridge was still eaten directly from the large serving plate. He says "the old ones" told him how when they were children they had to come up with a rhyme before they were allowed to eat the porridge.

He remembers a lot when he is interviewed in the 1940s. For example that the winner of the sleigh race home from church on Christmas day was always the first to have the crops brought in the next fall. That worship at home with psalms and reading of postils was held at Saturday evenings at six when the day's work was done.

He also recounts how the poor went around after Christmas and how different rules applied: if they were from the same parish they were to be given one loaf of bread, candles and Christmas beer, while foreigners were given half a loaf of ordinary bread and a loaf of white (wheat) bread.

On Christmas Day people were not allowed to visit even their closest neighbours, only to go to church. Even earlier youngsters used to go sleigh racing in remembrance of St. Stephen, patron saint of the Swedish region Hälsingland, and they would get food wherever they went until they were full.

At this time, the parish was divided into teams of pallbearers who carried the caskets to church. Only at the end of the 19th century did people start driving caskets by horse and carriage. However, the relatives had to find peple to dig the grave by themselves.

The substantial collection also contains recollections of many supernatural things, such as the casketmaker knowing when someone had died because the blade of his saw would twing.

There are also lots of historical curiosities such as the pillory in front of the church, where
in the 18th people who had picked a fight were forced to sit, enduring the ridicule and occasional spit of the inhabitants of the parish.

Image 1: St. Stephen races are known in history since the 13th century according to the Swedish Wikipedia article which is also where this image was found. It depicts St. Stephen watering his horses and the original can be found in the ceiling of the old parish church in Dädesjö.

Image 2: The photo from Göteborg City Museum was taken by an unknown photographer 1900-1910 and gives an image of the last ride in the old times at the countryside in the west part of Sweden. The coffin with lots of flowers behind the horses and the mourners walking down the road to the church services.