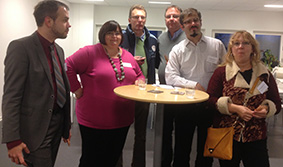 The Western Balkan Countries are faced with a high level of complexity when trying to build a data archive. This became clear at the opening of SERSCIDA working meeting at SND on Monday this week.
– It’s about resources, funding, the relationship with the researchers and access to statistical data, says Marko Krištof of the Croatian Bureau of Statistics.
The level of optimism is however high among the participants, which also include representatives from Serbia and Bosnia and Herzegovina.

The Support for establishment of National/Regional Social Sciences Data Archives, SERSCIDA, is an EU project which supports the establishment of national and regional data archives for storing social sciences data.
– We have great expectations regarding where SERSCIDA is headed, said SND’s Director Hans Jørgen Marker in his opening remark.

About 20 representatives from universities and potential financial and political support organizations from the Balkans gathered on Monday in Gothenburg to gain further knowledge about how to establish and run a data archive. Western Balkan universities that are part of the project include those located in Sarajevo and Zagreb, along with the Institute of Economic Sciences in Serbia. CESSDA is represented by FORS, UKDA, ADP and SND.
– But the question of establishing a data archive in the Balkans is not new, we have been discussing the matter for a long time, says Teo Matkovič of the Croatian Employment Service.
While in Gothenburg, the participants will gain knowledge about how SND was established and how it is organized and funded today. 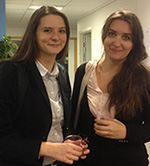 –Political support is very important, said SND’s Assistant Manager Iris Alfredsson and discussed the problems involved with getting researchers to share their materials.
A dream scenario would be for researchers to have a data management plan already attached as they apply for funding.

– We can tell how well prepared you are in the Balkans. It is also very positive to see how your countries are cooperating, you will have support and help from the rest of the world in your work, she said.

Model for funding sought
Project leaders Aleksandra Bradic-Marinovic from Serbien and Lejla Somun-Kruplija from Sarajevo were eager to learn.
– We would like to know more in detail about how you work, for example exactly what the different forms look like, said Lejla Somun-Kruplija.

Cooperation between universities and SND was also of particular interest, along with SND’s plan to provide training for researchers on how to submit and store data.
Among the participants was also Jasmin Brankovic from the Federal Ministry for Education and Science in Bosnia and Herzegovina. Janja Trkulja and Bojana Radulovič are two participants from the Croatian Science Foundation, the equivalent of the Swedish Research Council.

– Our main problem is really funding, said Janja Trkulja. But we are listening and learning and view this as something very positive. Our new board considers that work within SERSCIDA is very important and they have sent us here, so when we return home we will discuss with financial supporters how the model could look.
Attending the meeting was also SND’s Chairman Anders Brändström, who among other things discussed the Swedish Data Inspection Board’s ban against storing personal data and what it means for the SND’s work.

– It has to do with balancing the need to make data accessible and protecting personal integrity, said Anders Brändström.
Based upon the Swedish experience he encouraged the guests to strive for proper legislation and strong political support before building the structures. The fact that SND has a budget that is limited to five years is not always a good thing, he said; a longer time period may be required.

Challenges at many levels
CG Hjelm from Statistics Sweden came to the meeting and talked about how important it is to have access to legal assistance during entire data management process. He explained potential problems when it comes to making data anonymous. When it comes to the coordinated EU legislation, which is currently underway, there is a chance that it will constitute an obstacle for research, since it has to be approved by countries which have regulated access to data materials in a strict manner.

– There are many different traditions when it comes to how much trust you have in researchers. In Holland for example, you have to touch your keyboard every tenth minute in order to keep working, in order to ensure that there isn’t anyone else other than the researcher who is handling the material, said CG Hjelm.

The challenges are present at many different levels, as Iris Alfredsson said in her presentation.
Returning to Marko Krištof of the Croatian Bureau of Statistics, The CBS website www.dzr.hr has
100 000 subpages to process in order for the website to become more accessible to its visitors.
– We have a budget for salaries etc. but nothing for development. So we have to turn to the World Bank, the US, EU and Sweden to obtain funding for this.